There are obvious reasons why the past and the future are viewed very differently. One is known, the other unknown, one unalterable, one open to modification, one is the cause of the present, while the other will be the effect we cause in the here and now. But there are big differences in the perspective we have on the events in the past that impact us now, and the view we take of the impact the actions we take now will have on the future. 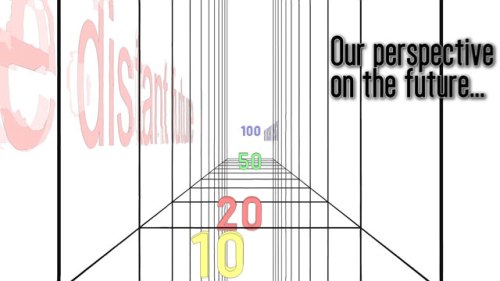 A couple of centuries ago the difficulties of viewing the past and future were much smaller, the amount and rate of change was minimal, economies were static, they may grow and shrink in response to agricultural production or as conflict between the various local warlords and kings vied for resources, but the growth of technology and commerce was very slow until the last decades of the 1700s. Population was relatively stable, its slow growth interrupted by the four horsemen, and for the vast majority that lived the need or opportunity to follow any life path different from their parents and grandparents was absent. With most of the population working on the land it was only the rare and exceptional that moved out of their agricultural feudal serfdom.

Economic growth has vastly increased the wealth available to a vastly increased population as a result of the industrial revolution and the expansion of trade and colonialism in the last couple of centuries. That rapid rate of change and growth makes our present perspective on the recent past qualitatively different from that seen by societies in the past. 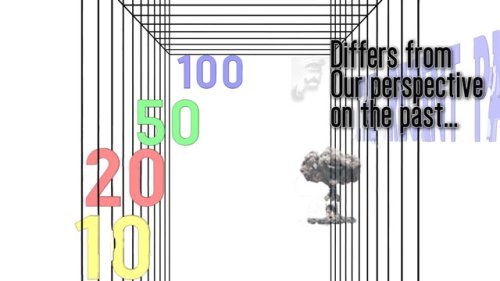 Despite the radical difference in the recent past, with a changing economic structure and technological advances the contrast between our view of the past and future remain. Some of this is rooted deep in biology. Our three score and ten lifespan, or biblical “best before” date curtails our view of the future, by the age of twenty we might consider what our future holds for the next fifty years, but beyond that is unlikely to be of direct interest. In contrast our view of important events in the past extends much further back because those changes have an ongoing and current impact on our lives. Not least because our parents and grandparents lived through those changes and the impact on them shaped how they raised their families.

There are always problems with extrapolating present trends, often the worst case scenario is emphasised to motivated political action, even when the scenario is unlikely and the response inappropriate.

Sometimes there are attempts at projecting possible futures that suggest that the change may not be linear, it will be worse than that. Recently a paper was published for discussion about the likely non-linearity of ice-melt and sea level rise.

However more effort seems to be directed at claiming things will be better than predicted by science in the political field than exaggerating the negatives.

What the future might hold links with a previous post on Utopias and dystopias. There is a large and diverse fictional body of work imagining future worlds. Often they are sly critiques of the present as with ‘1984’ and ‘Brave New World’, but there are also many books that try and imagine a coherent future history, or at least explore elements of human society in the future. From H.G. Wells ‘The Time Machine’ through the Asimov ‘Foundation and Empire’ series to Ian M Banks ‘Culture’ novels the possible shapes of future societies has been explored.

An ideal excuse to post about another not a list of ten (NALOT) favourite ‘Space Opera’ books!

This entry was posted in Animation, Climate, Politics, Visual media. Bookmark the permalink.

One response to “Perspectives on temporal sensitivity”