The US Trump policy is to return to the age of plentiful cheap fossil fuel that made America great in the 1950s-1960s.
“Conserving oil is no longer an economic imperative for the US, the Trump administration has declared in a major new policy statement that threatens to undermine decades of government campaigns for efficient cars and other conservation programs.”
There is a pattern of actions, opening up more restricted and offshore drilling sites. Reducing regulatory oversight and increasing the effective subsidies. De-funding the attempts to promote efficiency and reversing the attempts to reduce emissions. All of this is consistent with past attitudes to fossil fuel use, but it may need a historical context to see why.

After WW2 the major oil fields in the Mid East were run by western companies with the close oversight of their government because of the strategic significance, as well as the economic importance of the supply. The UK goverment directly ran the BP (British-Persuian) oil company. Oil flowed as fast as was possible and drove the post-war boom.

Eventually the Arab nations demanded 50% of the profit, grudgingly the US  companies accepted that demand from the Saudis. The UK government was not so willing to negotiate with its colony, regarding the rights to the oil as entirely a matter for the UK to decide. A decision biased by the profits flowing directly into government coffers. The result was the overthrow of Mosadegh in operation Ajax, a joint operation with the US who wanted to keep commies out of the Western Oil supply area. The UK still had to make a 50-50 deal, anything else would have resulted in the rapid overthrow of their newly installed puppet general.

But the oil kept flowing, at that point neither the West or the Oil nations had any reason to limit supply.

Then OPEC was formed. The Oil Producing and Exporting Countries finally realised that they could control the price by limiting the supply. That they could get as much, or more money for less product. And then the war between Israel and Egypt/Syria triggered an embargo on US supplies. The oil crisis of the 1970s turned an apparently unlimited and unconstrained source of cheap energy into a much less accessible and uncertain resource with a variable price. For possibly the first time since oil had been exploited as an energy source the prospect of having to maximise efficiency and minimise waste became significant factors in the design and operation in the use of fossil fuels.

Apart from this shift in the perception of oil from an unconstrained cheap resource to something that had to be used ‘economically’, there was another response. Nations and oil companies looked for new sources of fossil fuel outside the OPEC cartel. Off-shore fields were explored and possible sources in less hospitable regions like Alaska and Sumatra. It was an attempt to recapture the golden era when oil was cheap and plentiful driving the massive economic growth in the consumer culture of the West. A growth that had been unconstrained by oil prices or shortages.

To some extent it worked, finds like the North Sea fields provided supplies unimpeded by anything except the logistics of extraction. The amount of oil consumed by the advanced, modern societies jumped again. 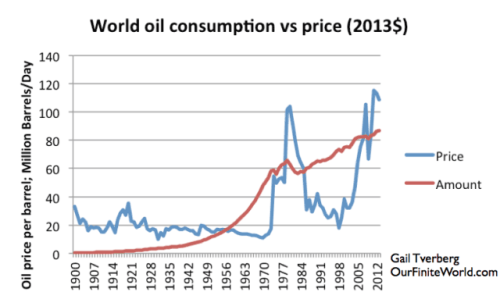 Western societies had become dependent on the abundance of cheap fossil fuel to drive the growth, progress and continual improvement in the quality of life, and amount of consumer stuff that inhabitants of the First World enjoyed. Previous interruptions, or limits on the supply, or rises in price had shown the damage that could result from any change from an ever increasing flow of oil from the industry that extracted, processed and distributed fossil fuels.

There were two problems.

One was that the increasing demand for more oil every year eventually hit logistical constraints. Expanding the processing and distribution infra-structure to meet the rising demand required large capital investment. A lot of the easy oil had been extracted. To keep increasing, production would need to access oil from more difficult sources, at greater cost. The resulting variability in oil prices between the later 1980s and now appears to be due to the amplification of small miss-matches between supply and demand within the global oil economy rather than wars, economic, or political impacts.

The second problem was the increasing realisation that burning all this fossil fuel was raising CO2 levels in the atmosphere and the oceans with potentially serious implications for the climate and ecology of both.  Even if the internal variability of the fossil fuel market price could be solved, and increasing demand from the growth in the West and developing Nations in the East, could be met, science indicated that the cumulative emissions would have dangerous consequences. It was another, more profound threat to the idea that continued social improvement and growing wealth could be driven by increasing consumption of fossil fuels.

One response was to look yet again at increasing efficiency and reducing waste. Alternatives with lower, or zero Carbon emissions were explored with more urgency and support that before as the problem of limiting the demand became a matter for governments seeking to control their emissions rather than respond to a temporary Geo-political hiatus in supply or logistical limit that could be overcome if prices rose enough to make extraction economically viable for more difficult sources. Attempts were even made at the global level to reach agreements on emissions at Rio, Kyoto, Copenhagen, Paris…

The other response, most overt in the US, has been an attempt to ignore or dismiss the science that predicts significant climate change and seek ways to continue the unconstrained consumption of fossil fuels that has conferred such benefits in the past, and provided a quality of life with increasing wealth to which the Nation had become accustomed. The US was not the only Nation willing to ignore the warnings from scientists, others, more covertly paid lip-service to the science but pursued a mix of policies that resulted in limited improvement or even continued expansion of fossil fuel use. The global companies that extracted and produced the oil and other fossil fuels, and the main business users of their product were always willing to follow the lead of those seeking to maintain demand and supply of an increasing amount of fossil fuels. They even played a role in promoting the disparagement of the climate science that threatened the prospect of stranded assets along with those governments, producers and consumers, for whom the implications of climate change were an inconvenient truth.

The previous US government under Obama  was limited in the changes it could make with the opposition from the other branches of government. It could make small regulatory changes and try and shift the focus, the emphasis of the government funding and industry oversight away from fossil fuel producers and towards reductions in carbon emissions.

Trump has also been limited in what changes can be made by similar political gridlock at the legislative Federal level. But in the many small changes there is a clear regression to perhaps the most recent time in folk memory when America was ‘Great’. When wealth and prosperity were increasing faster than ever before, the consumer society was exploding and everyone (well nearly…)  had never had it so good. A society in which that progress was driven by the cheap and increasing supply of oil.

TRUMP BUDGET PROPOSES STEEP CUTS FOR THE ENVIRONMENT
May 23, 2017

Shutting down the Energy Star program that has saved consumers billions $ and reduces consumption, or at least making it a self-certified, voluntary program for industry and property companies.

All of this demonstrates a desire to return to an Elysium where the social and environmental costs of consumption were Trumped by the drive for growth. When no demand for more fossil fuel consumption was opposed by anything more than a transient lag in supply. when Americans were getting richer on the flood of more and more fossil fuels with no deterrent on the expanding use and cumulative emissions.

Even the Lukewarmers seem mostly to agree that coal is, or should be a stranded asset for the foreseeable future. The damage from such an inefficient fuel makes it more expensive and polluting than most alternative fossil fuels, never mind zero emission alternatives.
But perhaps the Trump statement that really reveals the depth of his enthusiasm for a ‘Gilded Age’ of uncurbed fossil fuel consumption is this tweet.

Donald J. Trump
✔
@realDonaldTrump
America is blessed with extraordinary energy abundance, including more than 250 years worth of beautiful clean coal. We have ended the war on coal, and will continue to work to promote American energy dominance!

This entry was posted in Climate, Economics, Politics. Bookmark the permalink.